+12.3% Chinese Tourists for the Golden Week


A total of 67 million Chinese tourists traveled across the country on Friday as the nation's Golden Week holiday came to an end, state media reported, citing data from China's National Tourism Administration (CNTA).
The number of tourists in the country on the sixth day of national holiday - one of the largest mass movements of people in the world - increased by 12.3 percent from a year ago, Xinhua said.
Tourism revenue generated on Friday totaled 54.6 billion yuan, up 15.1 percent from the same period last year.

A cooling economy means that tourists in the second largest economy in the world, which spent 261 billion dollars abroad last year, have stayed close to home this year, which is a boon to domestic tour operators.
Chinese People will start returning to their country this weekend, adding pressure to the country's air, road and rail systems. 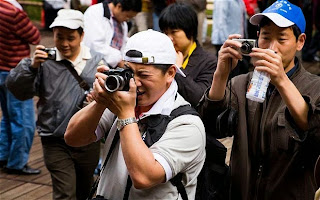 On October 1, the first day of the party, 15.03 million trips were made by train, a historic record, Xinhua said. This year's national holiday was extended one day due to the Mid-Autumn Festival, held on October 4

Countries in Southeast Asia and Japan will likely be the top beneficiaries of Chinese outbound travel during Golden Week this year, while South Korea will likely end up losing out on some Chinese tourist spending.


The China National Tourism Administration’s Holiday Travel Guide indicates that the Southeast Asia region remains the most popular short-haul travel destination. This is largely attributable to the relative ease with which certain countries in the region grant visas to Chinese passport holders. In addition, the number of direct flights between Chinese and Southeast Asian cities has grown this year, making it easier for Chinese tourists to reach various destinations in Southeast Asia. source