Do you speak Tourist ?

Do you speak Tourist ?


"A simple smile and a hello in their own language completely satisfied," the guide published by the Regional Tourism Board of the Chamber of Commerce of Paris is denominated.

"Roan ING gouang Linne" is how he tries to explain the subtleties to say "welcome" in Chinese. "They are eager buyers of luxury brands," he explains the habits of a million Chinese visiting the French capital every year. "They are picky about food and wine.

Do You Speak tourist ? /doyouspeaktouriste.fr 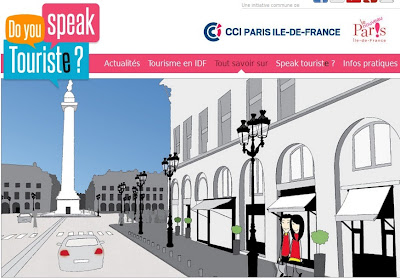 Parisian hoteliers aid and taxi drivers, known for their rough charm, with audio on how to ask non-speaking tourists about their desires. The guide also includes 10 other nationalities. Under Chinese tourists come organized bus tours, as 84 percent today sightseeing individually. Chinese tourist spends an average of six to seven nights in the most visited city in the world and forks € 171 (HK $ 1,738) per day - which is 31 euros more than the average American and 15 less the average Japanese.

As stated in the Annual Report of China Outbound Tourism Development 2009-2012, 70.25 million Chinese tourists traveling abroad just 2011, with a year-on-year growth of 22%. According to the number of tourists, China’s outbound tourism market has been the largest market on the planet, 1.2 times and 3.5 times the U.S. market, the Japanese market.


In 2012, it was featured  that the Australian Minister for Tourism Martin Ferguson said during a meeting of the Victoria Tourism Industry Council that the Asian market, especially China, is key to the growth of the Australian Tourism.
Fast forward to the present, this forecast is gradually coming true as Chinese outbound tourism has reportedly increased by 16% in the first quarter of 2013,


China now ranks first in the global outbound tourism source market, approximately spending over US $102 billion compared to the US$73 billion in 2011. Thus, overtaking Germany and the U.S. that previously held the top spots. Given these figures, it’s only understandable why many countries seek their fair share of Chinese travellers to bolster their tourism industry, and the Land Down Under is no exception

Where Chinese do travel to ?

Where Chinese travelers fly to ?


Even on a rainy cloudy day in downtown Manhattan, crowds of smiling Chinese tourist photos of their friends and family snapped next to the "Charging Bull," a three-and-a-half-ton bronze sculpture landmark in the Financial District in New York. Each time the masses began to thin, another Chinese group rose to the sculpture. A long line snaked down the road. 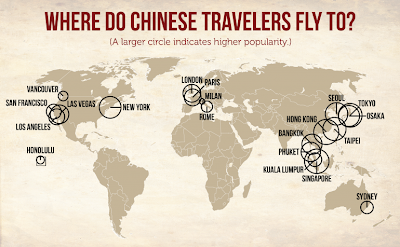 Shiny spots on the bull's surface clearly showed the tourist spots touch the most, including the hips and huge testicles. The "Charging Bull" is famous in China and replicated in several places, including Shanghai's financial district. Noticeably missing from the Shanghai version, but the bulls are disinguishing male characteristics. Among the people waiting to touch, photograph or be photographed with the famous rate recently you were Songlin and his family. Traveling with his wife and son and a large tour group of fellow Chinese tourists, said the first-time visitor to New York, why does he see what would appear to be a random local attractions.

"I heard about the Wall Street Bull, as well as Wall Street and Manhattan," You said he was hanging out with the required camera around your neck on the court in Bowling Green Park.

"I did it while learned in school, and I read the financial newspapers. 11:09 Then there was, I heard about the twin towers [of the World Trade Center] destroyed, and it left a deep impression on me." Reference Now, years later, it was his first visit to the U.S., a dream fulfilled to see what he had personally observed only once or heard about media. (See "What Chinese tourists think Of New York.") The Chinese are coming, the Chinese are coming! Workers in the Financial District are often confused (and maybe a little confused) by the hordes of tourists that flock to the very active area in the summer.

What, really, these tourists expect to see the mechanization of the global financial system?


Why is the bull worthy of pilgrimage? And more recently: What's with all those more Chinese faces show up in the convoluted masses? Clues in a global economy, the change in flow expendable income in China can be found, but remains both fascinating and unfathomable for many who are in their throes. Chinese tourists now present a rapidly expanding demographic: people who explore for the first time over the means and freedom to the world on your own - and where they go, and why, show the changing dynamics of the world and the vagaries of millions so far unexplored personal interests.


Hong Kong needs to Nearly Double the number of hotel rooms over the next decade to keep up with rising demand, According to a government task force.


The special task force on convention and exhibition industry and tourism, share of an advisory panel set up recently by the city's leader, notes That the number of tourists visiting Hong Kong will rise Substantially in the next 10 years, bolstered by a steady Increase in tourists from mainland China, fueling the need for many more hotel rooms.www.discoverhongkong.com/eng/ 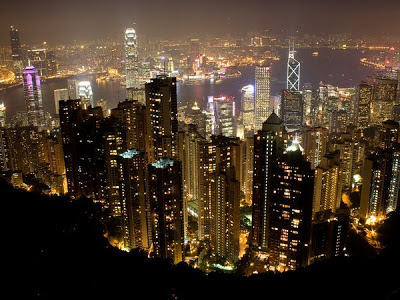 The Hong Kong skyline as seen from the Peak In 2012, Hong Kong received a record 48.6 million visitors, up 16% from a year Earlier, According to the Hong Kong Tourism Board. Those of visitors, 71.8% cam from mainland China. The city's 68,300 hotel rooms Roughly enjoyed an average occupancy rate of 89% last year.

"If the Chinese economy continued to grow over the next FEW years ... and earnings and income continues to rise, then mainland tourists Will continue to be a main source of tourism arrival for Hong Kong,"
said Raymond Yeung, senior economist at ANZ. Analysts expect Hong Kong's tourism industry to grow further Top Following the completion of major development projects Including the Hong Kong-Zhuhai-Macau Bridge and the high-speed railway linking Hong Kong to Shenzhen and Guangzhou. While the government has Invested in exhibitions, trade fairs and marathon races, Mr. Yeung said the government


Will Have to work harder to lavish tourists as Hong Kong faces competition from cities in mainland China. Tourism accounts for around 5% of the city's gross domestic product, he says.

DESPITE Increases in visitors from China, growth in the Hong Kong hotel industry has-been tempered by a decline in tourists from the U.S. and the rest of Asia. Tourism saw a boon in 2011 as temporary visitors from Japan to Hong Kong switched Following the earthquake.


Michael Li, executive director at the Federation of Hong Kong Hotel Owners, said he Expects the number of hotel rooms in the city to rise from the current 76,000 to 68,300 by 2017 due to Ongoing expansion projects.


The call for more hotel capacity aussi comes at a time When Hong Kong's land shortage HAS increasingly Caused outcry from residents, prompting the city's leader, Leung Chun-ying, to reiterate recently That the need for hotel rooms shoulds be Weighed against the demand for residential expansion.

Even as tourist numbers rose last year, Nearly 25 million of Those Were same-day visitors, and as a result the city's hotel occupancy rates Remained unchanged for 2012. Mr. Li Urges caution against overly rapid expansion of hotel capacity.


He says hotel expansion Requires very careful examination of tourist behavior and other economic trends. Investing in hotels is a long-term business That Usually takes at least 10 years for a return, he notes. In addition, Mr. Li said Increasing the number of hotel rooms Would require a competitor Increase in frontline staff and executive management, something he's not sure Hong Kong's education system Could Accommodate 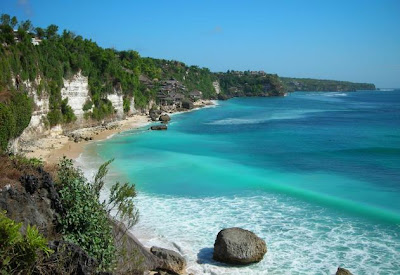 Wiryanti Sukamdani, chairman of the Indonesian Tourism Promotion (BPPI) Commission recently said Kuta number of visitors from China, is growing every year, thanks to the stunning economic growth and rising middle-class ICT.

However Sukamdani Indonesia was one of the most popular tourist destinations in the demand for many Chinese tourists. "Come in Indonesia, especially in Jakarta and Bali for business and pleasure," he said. "Packages Promotion and attractive tourism should increase to allow more Chinese visitors Indonesia.
" I Gusti Ngurah Putera, secretary general of the Ministry of Tourism, Marketing and Creative Economy, said the number of Chinese tourists to Bali, was second only to Australians.
"Temporary relations in Indonesia and China and other ASEAN countries is positive, and we expect that this trend will continue to grow tourism," said Putera.
Department arranged for the development of tourism is growing in China in June last year with the participation of all stakeholders in the tourism sector in Indonesia.

According to the Bali Tourism Organization, the number of Chinese visitors to the island reached 310,904 people in 2012, an impressive growth of 31.26 percent over the previous year 236868. Chinese tourists contribute 10.75 percent of the total number of foreign tourists to Bali. "China Mittal Japan with the second largest number of tourists in Bali in force in Australia," said Ida Kade Subhiksu, head of the Bali tourism.
The analysis shows that the agency's nearly 31 million Chinese people travel around the world fell in love with holiday periods. About 91 percent of holiday travelers dissertation Chinese Asian-Pacific region and in most of them from the three major cities in China: Beijing, Shanghai and Guangzhou.

How Chinese tourists spend their money in Bali

As a rule, the Chinese tourists stay in star rated hotels and prefer to spend their leisure tours, shopping and water sports. The agency has recorded average daily cost in Bali reached $ 150.34 per person.
I Ketut Ardhana, President of Indonesia, and the Association of Travel Agencies (ASITA) Bali branch, shared their experiences in the tourism promotional tour in China in June last year, saying that it seeks Chinese tourists visiting Bali. "Many of them prefer to take charter flights

While some companies have opened direct flights from China to Bali's Ngurah Rai Airport," said Ardana. Ardana said the Chinese New Year has always been a popular time of the pulse to travel to the Chinese. "During the Chinese New Year, thousands of tourists from the country to spend their holidays in Bali for at least seven days," he said. Ardhana recalled that the Chinese market has great potential.
"I expect that all ASITA that will improve their membership packages and mechanisms that can eliminate illegal activities detrimental to the image of Bali," he said.